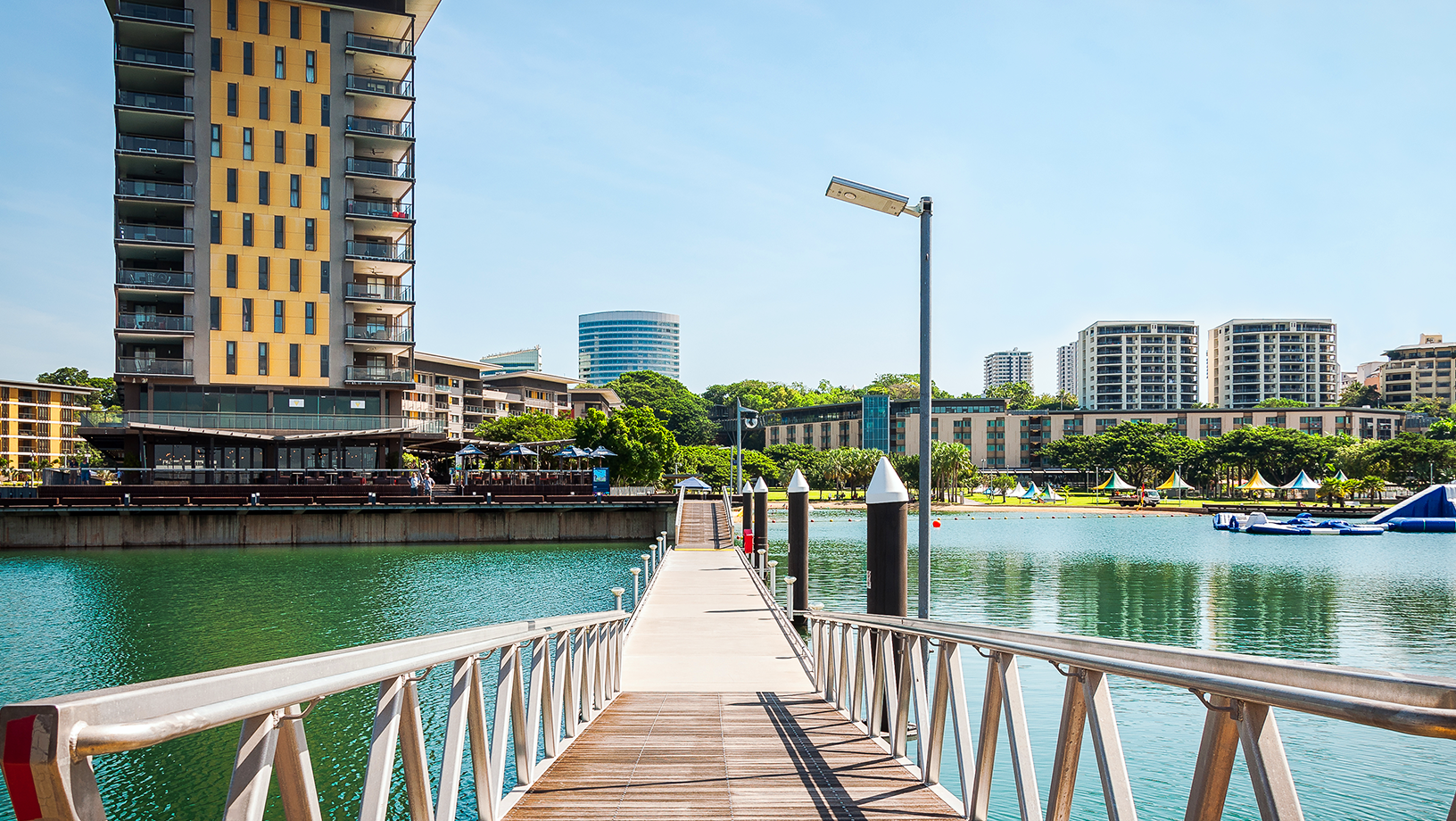 With sparkling and seemingly never-ending views of the Timor Sea, Darwin is a beautiful, tropical city with a culturally diverse and laid-back atmosphere. It’s the business capital of Australia’s Northern Territory and is home to over 130,000 residents. Darwin is also the tourism and international gate way to Asia and is closer to Jakarta than Bondi.

The traditional owners of Darwin are the Larrakia (saltwater) people, who were the first to established trade routes in the region with the Tiwi, Wulna and Wagait people. In 1839, Lieutenant John Lort Stokes arrived in the area, and decided to name it after his former shipmate the English naturalist and biologist, Charles Darwin.

Darwin has a rich past including ten-thousand years of Aboriginal history, early pre-war pioneers and survival stories from WWII.

The median age in Darwin is 33 years old, and the most spoken language is English, followed by Greek, Tagalog and Mandarin. Majority of locals are born in Australian, however, 31.1% of the population are descendants of immigrants.

The climate in Darwin is vastly different to Sydney and Melbourne, where its sub-tropical and temperate oceanic. Darwin has tropical climate with two distinct seasons, the ‘wet’ and the ‘dry’.

The wet season (November to April)

The dry season (May to October)

Transportation in Darwin is limited to buses, ferries, driving, cycling and walking. Buses operate seven days a week, except Christmas Day and Good Friday. Buses run from the Darwin CBD, Casuarina and Palmerston regions. While ferry routes are limited to and from Cullen Bay and Mandorah, however some services also travel to the Tiwi Islands. Cycling is one of the city’s most popular mode of transportation with over 70 kilometres of bicycle paths.

There are three major shopping centres in Darwin − Casuarina Square, Gateway Shopping Centre and Palmerston Shopping Centre. However, there are plenty of boutiques and speciality stores including Paspaley Pearls, di CROCO and countless Aboriginal stores selling paintings, sculptures and textiles.

Dates changes annually, so make sure you check-out the Northern Territory website.

There are numerous entertainment venues in Darwin including:

The largest religious group in Darwin is Catholic followed by Anglican, Greek Orthodox, Buddhism and Hinduism. Locals wishing to visit the local church, mosque, temple or other institutions can visit:

The Northern Territory has Australia’s strictest entry and quarantine rules. There are plenty of regulations that stop the entry of fruits, vegetables and plants. There are also laws that prevent household plants, seeds and grain, so make sure you check the local government website if you’re planning to bring these to the Territory.

If you’re thinking of moving to Darwin and don’t know where to start, contact Grace. Grace has helped thousands of families with their interstate relocation and removals in Darwin. Our complete door-to-door service provides you with a hassle-free and stress-free move to the Top End.  We can pack and deliver all your furniture and fittings and can even help you transport your vehicles and pets. Grace is the brand you can trust in interstate furniture removalist and rearrangement and are one of the top Darwin Removalists.

TSA Pastoral Services relocation
TSA Pastoral Services relocation. We are very happy with the crew - Robin was easy to work with and efficient and professional. We are happy with the problem solving especially with the reception desk - Mervyn and Robin displayed good natured perseverance with dismantling and reassembly in our new space. The crew that finally came (delayed 2 days due to COVID) were helpful and managed well by Robin. Thank you
Robyn, 15 October
Highly recommend
I wanted to say how impressed I was with “the guys” yesterday. Yes they got the job done but the point of difference was with them working together as a team. Peter was instructional with the boys throughout the process, teaching / showing them different things without being mean or condescending. Jordon and Cooper just powered through all day without complaint, without stopping and the best of all, without attitude. The move went through without anything broken and no walls being bumped either.
Susan Brooker, 11 October
Unbelievably Good Experience!
I am genuinely shocked and surprised at how smoothly this move went. This was a rather complex interstate move with delays on my end. The Grace Canberra Team (Venetia and Morgan) took care of everything and really went above and beyond to get this move done. The packing, storage, transport and delivery was way above expectations. My items arrived with zero damage (even the fragile glassware) - literally not a mark on anything. Mick and the Sydney team unloaded and positioned everything perfectly on arrival. And to top it all off - Grace even came back to collect the boxes and packing paper - this was a huge help, as the quotes I got for rubbish removal were expensive. Thank you to everyone at Grace for making this move possible and for being so flexible and careful with all my items. This was a complex interstate move during the state-wide lockdown period (both ACT and NSW were in lockdown during this time) - and Grace somehow made it all happen. I am extremely grateful as I am now able to settle in to a new property and get on with life. I have been raving about Grace Removals ever since, and will continue to do so for many years to come.
Nick E, 30 September
The consultant was extremely helpful…
The consultant was extremely helpful and informative, The removalist were professional and incredibly quick.
Margaret Giles, 28 September
Highly recommend
Highly recommend. Thank you for the professional service.
Rajiv Pathinayaka, 28 September
excellent service
I had a quick and useful response when I first contacted Grace, the team picking our stuff was friendly and did an excellent job, and even though they had mentioned the possibility of the delivery taking over 3 months, are things arrived in 1.5 months without any issues.
CGI, 28 September