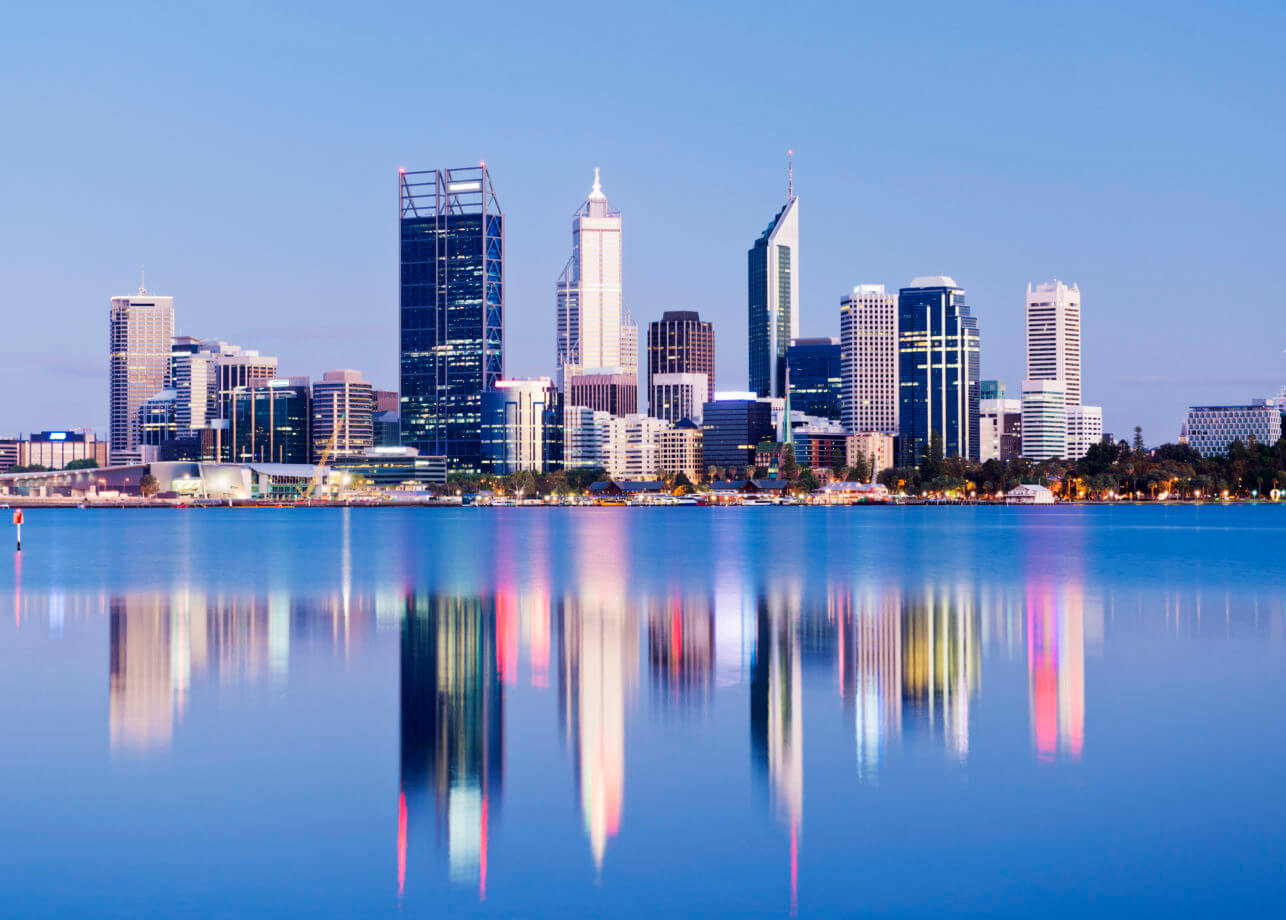 Perth is the capital and largest city of the Australian state in Western Australia. It is the fourth most populated Australian city with over two and half million people. It’s home to vineyards, gorgeous beaches, and parklands. The population’s median age is 36 years. 25% of the population do not follow any religion, 25% are Catholics while the rest follow several different religions.

Perth city is located on the land on which the Whadjuk Nyoongar, the Aboriginal people of Western Australia, have lived for at least 38,000 years. The discovery of ancient stone implements found near Swan River have been carbon dated and verified as being over 38,000 years old which is evidence of the area being inhabited by Aboriginals.

In 1697, European settlers arrived in ships commanded by de Valmingh at Cottesloe Beach, and moved to Swan River near Freshwater Bay and settled there. In 1829, Captain James Stirling founded Perth with more Europeans arriving and making this area their home. It was named after the town of Perth, in Scotland.

Transperth, Perth’s public transport network helps people get around the city by train, bus or ferry. A short walk from the city’s the main business district, shopping and tourism precincts will take you to any of the three of Perth’s train stations: Perth Station, Perth Underground and Elizabeth Quay. Most of them stop at either Wellington Street or the Esplanade Bus station. If you need to access the outer areas of the city, City West, McIver and Claisebrook stations are the ones to use.

Transperth departs from the Elizabeth Quay Ferry Terminal which will take you to South Perth in approximately 10 minutes where you could enjoy the views of the city from the foreshore or visit the Perth zoo.

A free transit zone operates within the city and you can travel on any bus within Perth for free but travelling outside this zone will need a Smartrider ticket which can be purchased at train stations or from newsagents.

You could also travel within the city using Central Area Transit buses. They operate daily, with their four routes covering all parts of the city. But the best way for tourists to see Perth is on the red double decker buses that allow users to get off and on at the major tourist attractions.

Captain Cook cruises or the Little Ferry Company will ferry you across to the Optus Stadium. Captain Cook Cruises depart from Barracks Street jetty or from South Perth. Little Ferry Company, WA’s only solar electric ferry will take you from Elizabeth Quay to Freemantle or upstream to the Swan Valley wine region, along the foreshore to East Perth and back.

Visit Rottnest Island, Western Australia’s island paradise and include a stunning cruise along Swan River by catching a ferry from Barrack Street jetty.

Boat owners can cruise into Elizabeth Quay boat moorings and park their boats for a short stay. Alternatively catch a gondola from Elizabeth Quay and cruise down the Swan River – an ideal, romantic way to celebrate a special occasion.

Another way of exploring the city is by bike. You can hire one from a facility at Point Frazer for a whole day or longer. Hire a bike by using the vending machine at Frasers Restaurant and cycle around Kings Park on the designated cycle paths.  Take in the scenic views of Swan River by jumping on a bike and riding along the Swan River Bridges or stop at the parklands for a visual feast. An hour’s ride will take you across South Perth and Victoria Park foreshores, as well as to the Burswood Peninsula and Optus Stadium.

West End is the upmarket shopping arena where international fashion houses and labels can be found. On the beautiful heritage streetscape of King Street, you can follow the Fashion Walk of Fame and visit some of the same brand stores found on Rodeo Drive and the Champs-Élysées. Towards Wellington Street, independent boutiques and fashion houses offer unique items of clothing.

Wesley Quarter is a fabulous new addition to the chic West End, tucked in behind the gothic style Wesley Church, built in the mid-1800s. The glamorous shopping precinct is a superb example of old meets new. Your West End wardrobe can include designer luggage, shoes, handbags, jewellery and, of course, designer clothing.

Explore Perth’s Centre for Photography and acquaint yourself with Indigenous Culture at the Aboriginal Art Gallery. Visit Perth’s museum for a peaceful exploration of historical artefacts. You could grab a book to relax with or do some in depth research at the State Library.

Partake in some skating or watch others flip and twirl at the Leederville Skate Park. If footy interests you, you can cheer the local footy teams (the Eagles or Dockers) at Optus Stadium.

Perth has several public buildings and historic sites. The most significant being Parliament House, Government House, the Supreme Court Buildings and the Perth Mint.  The Perth Town Hall and the WWI memorial of ANZAC Cottage and the Old Mill will excite any history buff with their amazing architecture and designs.

Check out Perth’s migrant history at the city’s cultural sites and memorials from the Jewish War Memorial to Chinatown which is resplendent with Asian culture, architecture, statutes, restaurants and nightlife.

There is so much more to do and see in this vibrant city you will need a year to explore it all.

If you plan to move to this phenomenal city, you should engage Grace Removals for a smooth transition. We are Australasia’s largest removalists and the most experienced. We have been managing intrastate, interstate, and international removals for over 100 years so you can be assured of quality service and a stress-free move. Call us on 1300 723 844 for a no obligation quote that’s reasonable.

Grace, on top of the removalist's list
I would like to take this opportunity to thank you and your two employees for yesterday. The guys are extremely great employees, given the Covid circumstances and the present difficult times. The manner in which they conducted the job was commendable. Courteous, efficient, co-operative, extremely hard working and diligent. Both operatives did a wonderful job above and beyond their duty, were well mannered and nothing was too much trouble. Their duty of care was outstanding. I couldn’t have asked for a better outcome and I fully recommend your people to anyone needing a removalist. Well done Grace – a superb experience! Your’re on top of the removalist’s list.
Cottlesloe Property Trust, 29 July
On time
On time, friendly to deal with. Quick and no damage was done to any of my furniture or damage to walls. Put furniture in place were we want it.
Frederik & Hettie Minnie, 27 July
We always use Grace
We always use Grace for all of our moves! They have great teams and Nathan always works hard to make sure everything goes to plan! Thank you Nathan and Adrian
Jeffrey, 26 July
Perth to Cairns
Perth to Cairns, house and car move. Excellent service from the Grace team at both ends Timescales for move were accurate goods arrived exactly on scheduled date, delivered the next day Would definitely recommend Grace
Sean , 25 July
THE ONLY WAY TO MOVE.!!
Of the 12 moves we've made, this one from Qld to the ACT with Grace Removals was by far the smoothest, professional, & worry free that we have experienced. Every person we were involved with from Grace, was totally helpful, cheerful, knowledgeable, & working to see that our goods were wrapped and packaged in a way to ensure they arrived in original condition. We had no damage or breakages....a totally professional operation. THANK YOU.
John & Noelene, 24 July
Amazing service at every step
We had a lot of household effects to move and I was concerned that we would only get an accurate quote if someone actually viewed what there was to move. Only Grace and one other company would do this. Although it turned into a videocall because of Covid, I felt more confident that a sufficiently big truck would be booked and the Grace quote was significantly cheaper than the other company. In addition, the container system used meant we could move out on a Thursday and not move in until the following Monday, avoiding weekend rates, because we had a simultaneous settlement on the Friday taking place too late to move in that day. On both days the removalists worked tirelessly. We were extremely impressed and would have no hesitation in recommending the company. Co-incidentally, a friend of ours moved on the same day with Grace and also commented on how good they were. We are certainly very happy customers.
Elizabeth, 24 July