The complete moving guide to Hobart

The complete moving guide to Hobart

Nestled in the foothills of Mt Wellington/Kunanyi, Hobart is a small city with big of things to offer. With an amazing art scene, mouth-watering wine and dining options, and breathtaking natural attractions, Hobart is one of the most popular places to visit in the world.

Hobart is Tasmania’s capital city and is located at the entrance of the Derwent River. It’s also the second oldest capital in Australia, so expect a host of heritage buildings to greet you upon arrival.

As of 2016, 222, 356 individuals live in Greater Hobart while 50, 439 people call Hobart city home. The median age in Hobart is 39 years old1. Majority of the locals who live here are born locally at 71.2%, followed by British expats at 4.1% and Chinese professionals at 3.5%. It’s no surprised that English is the most common language in Hobart − approximately 79% of households speak English at home1.

In terms of employment, most locals are employed in the Healthcare and Social Assistance industry, followed by Public Administration and Safety, and Education and Training. The chart below is from the City of Hobart’s economic profile page2: 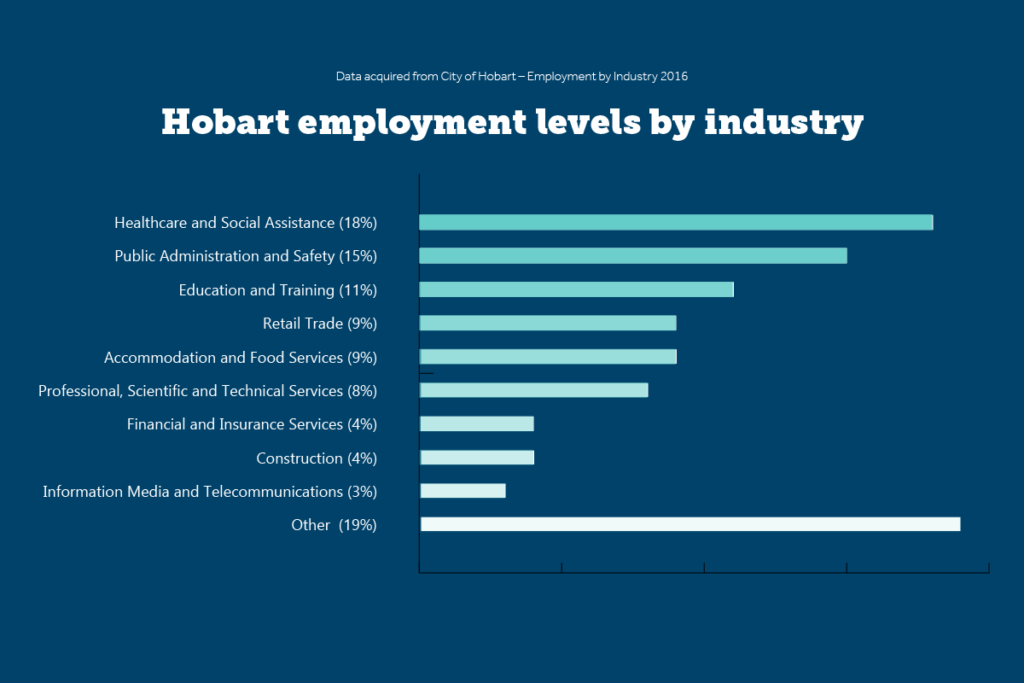 Individuals wishing to live in Hobart should know that like most European countries, Hobart has four distinct seasons: Summer, Autumn, Winter and Spring3.

In terms of rainfall, Hobart is quite dry and is Australia’s second driest capital city after Adelaide. Last year, the Australia Bureau of Meteorology reported total rainfall at Hobart was 656.mm4.

Those wishing to move to Hobart with their families can enrol their children at:

While those with older children can consider The University of Tasmania or TasTAFE.

The most popular way to get around Hobart is by car. Approximately 50% of households5 in Greater Hobart have access to two or more motor vehicles. Those without private transportation can use the city’s buses which travels to the North West, Northern, Southern, East Coast and West Coast of the state. There are also ferries that link Bruny Island to the mainland and the Bellerive Ferry “provides a fast, safe, and convenient passenger transport option that links the eastern shore with the city of Hobart”6.

There are plenty of small shops and markets around Hobart where locals can buy artworks, clothing and produce, this include the Wander Bohemian Market and the Salamanca Market which is held every Saturday. Those wishing to shop in shopping centres can visit Eastland Shopping Centre, Northgate Shopping Centre and the Cat & Fiddle Arcade.

Not to be beaten by bigger Australian cities, there are several annual events that are unique to Hobart, including:

For more information visit Hobart & Beyond or The City of Hobart’s Arts and Cultural festival page.

Locals generally enjoy concerts, art and music shows at MONA, the Theatre Royal and other providers.

Below is a breakdown of religions practiced in Hobart: 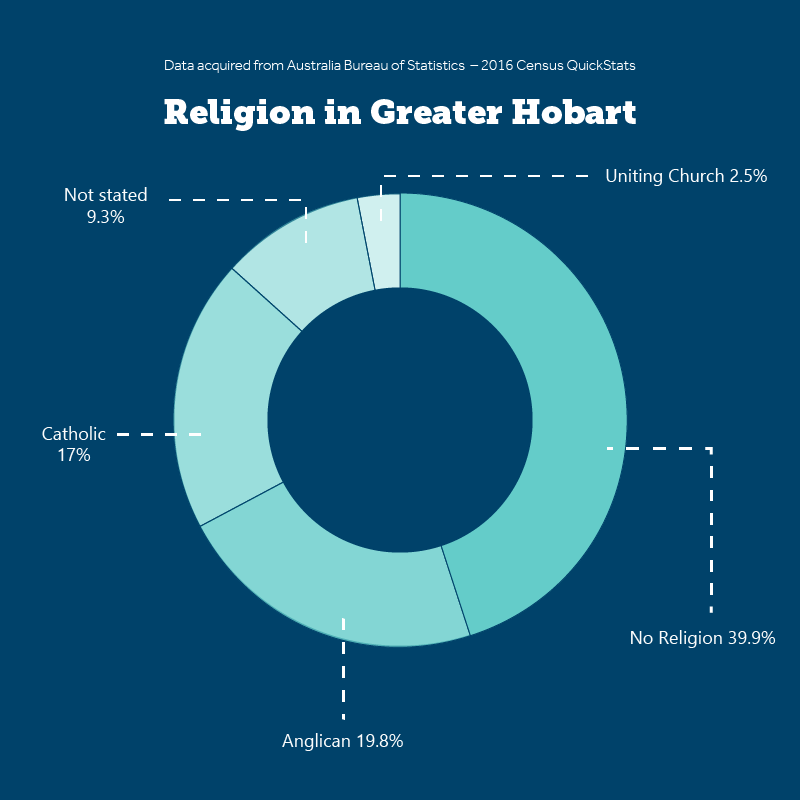 Like most Australian states, Tasmania has one of the strictest biosecurity laws in the world. Below are a list animals and items you cannot bring into the state7:

Before you enter Hobart, make sure you read the complete list at Biosecurity Tasmania.

If you think Hobart is the Australian city for you and you’re interested in moving to Hobart, make sure you contact Grace. Grace can help you move to Hobart with our door-to-door complete removals service. We can take care of the entire process from the packing, loading, disassembly, assembly and can even unpack, set-up and clean your home so it’s ready for you when you arrive. If you’re after a professional, convenient and comprehensive removalist to help you relocate to Hobart, call Grace on 1300 723 844 or fill in one of our quick quotes.

2 City of Hobart, Employment by Industry

4 Australian Bureau of Meteorology, Tasmania in 2020

Everyone that we were in contact with…
Everyone that we were in contact with from the first call to the delivery were very professional. No questions unanswered. A very good experience. This is our second move with Grace.
Dorothy Mant, 03 December
A very reliable removalist company who…
A very reliable removalist company who I have dealt with for over 25 years.
Edward Harris, 02 December
Very nice and professional people
Very nice and professional people. All my possessions were packed and shipped to storage. I had issues with the settlement on m to house and had to change dates a few times. Rachel at Grace was always accomodating, and appropriate solutions found. I can't speak more highly of their flexibility and customer service. The goods all turned up undamaged, and the beds assembled by the removalists. I had initially thought they were a bit pricey, but when you consider that they moved my goods from the Sunshine Coast to Ipswich, I am pretty happy. A pal was charged near the same for moving a few Ks by a different company. If you're comparing apples with apples, Grace come out looking very good
Judy Allamby, 02 December
The 3 guys were absolutely fantastic
The 3 guys were absolutely fantastic. Couldn't do enough to ensure the move was smooth. Such pleasant people as well. They are an asset to the company.
Tanya Zantis, 30 November
Very happy with the service I received…Happy costumer
Very happy with the service I received from Grace Removals. My stuff went from NSW to Caloundra. I couldn’t complain at all. Thankyou.
Marilyn Guganovic, 28 November
Excellent customer service and operations
Grace removals delivered an outstanding level of customer service and professionalism. Our recent move interstate was very well managed given the complex logistics involved. The consultants, operational staff and removalists were brilliant to deal with ensuring everything went to plan.
Mary Atley, 26 November